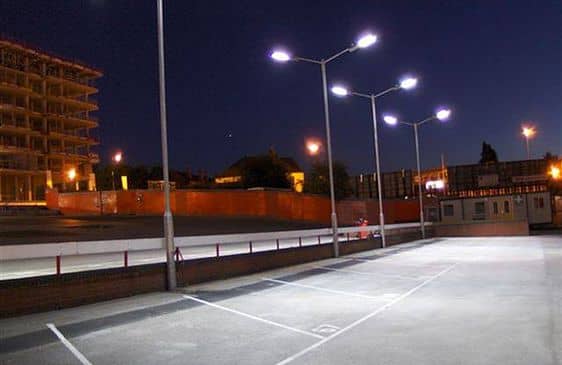 Constellation Lighting have worked with Sheffield United Football Club since 2004 when we were asked to develop an improved lighting solution for their carpark, which would also be low maintenance and energy saving. Car parks were traditionally poorly lit, and maintenance is a problem due to the height of the luminaires, which makes access difficult and costly.

In Sheffield United’s case their lighting comprised three 500W SON’s mounted on the stadium building and illuminating the front of the carpark, with one additional 500W SON mounted to the side. This arrangement gave poor illumination and spread, and with their lights left on all night the maintenance workload was a problem.

Throughout adopting LED technology Sheffield United were able to illuminate double the original car park area with a much more even light spread courtesy of twenty four Constellation Jupiter 48W LED luminaires a leading model at the time. Further benefits of their switching to LED were that the light colour is much more representative of daylight, being 5800K in temperature, and so the overall lighting effect had been totally transformed. In addition the long life of LED means that maintenance is no longer a factor. The real added bonus to the customer though is that through switching from four high power SON lights to twenty four low energy LED lights their total power consumption was actually halved although the illuminated area has doubled.

In 2016 we were asked to further update their carpark lighting. To their delight, we were able to deliver an even more modern LED product with even higher performance than the now discontinued Jupiter model. Such is the progress in LED technology over the last decade or so. We installed a bank of our very own Futura Street Lights. The Futura range are extremely efficient and very reliable IP65 rated street lights and have a sleek and stylish shape that’s pleasing to the eye, ideal for the main parking outside Sheffield United.

Our Futura Lights outside the stadium