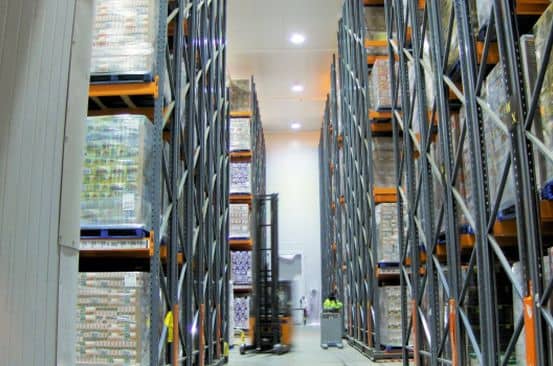 The McBurney Transport group was founded in 1965 in Ballymena by Norman McBurney. Since then the company has grown substantially to become one of Ireland’s largest independently run logistics operations, offering a wide and varying range of transportation and warehousing services tailored to meet each of their customer’s needs throughout Great Britain and Northern Ireland, the Republic of Ireland and Europe. Part of its portfolio includes McBurney Refrigeration Ltd which has the ability to handle 22,500 frozen pallet spaces and 5,000 chilled/ambient pallet spaces.

In 2007 McBurney Refrigeration Ltd set up an Energy Committee to review its power consumption and look at ways to reduce its carbon footprint. One area that became an obvious target was its warehouse lighting, which relied on 500W SONs. These were mounted 14m high and apart from the energy that they were drawing to run they also had the effect of generating heat (the warehouse is a coldstore running at -22°C), and couldn’t be switched off because they had a high failure rate if they were allowed to cool and then heat up again.
Constellation Lighting surveyed the warehouse and suggested replacing the 500W SONs with 90W Saturn Series 8 72 LED high bay lights on a one for one basis. McBurney Refrigeration were a little sceptical and so agreed to a 10 light trial, sufficient to cover three aisles of one chamber. The trial was a total success, and in March 2008 another 60 lights were ordered to complete the chamber, which were installed in July 2008. After a couple more months McBurney were able to build up a picture of the cost savings, based on the reduction in energy units used since the lights were installed, and took the next step of ordering another 60 lights to do their next chamber.

In 2011, based on their experiences with Constellation, McBurney then ordered a further quantity of 114 Saturn 72 LED lights to replace 500W metal halide lights in one of their newer large chambers. This took McBurney’s quantity of Constellation LED lights to over 240, demonstrating their faith in both the company and the product.

McBurney have found the following key benefits in switching to LED lighting:

Stephen Serna, IT Manager for McBurney Refrigeration Ltd and Chair of its Energy Committee says “We have been extremely pleased with Constellation Lighting, as a company, who have gone out of their way, whenever required, to give us advice and help in the decision making process, as well as the installation of the lights, and as such I would give my full recommendation for both the product and the company, if you are looking to change to LED lighting”.